Some Interesting links to show the range of things you can learn from youtube.


Some Types of Art / Terminology

From Wikipedia, the free encyclopedia
"Realism in aesthetics" redirects here. For other uses, see Aesthetic Realism (disambiguation).
Not to be confused with Realism (art movement). 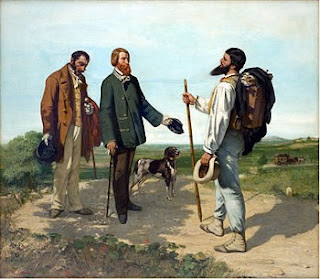 Bonjour, Monsieur Courbet, 1854. A Realist painting by Gustave Courbet.
Realism (or naturalism) in the arts is the attempt to represent subject matter truthfully, without artificiality and avoiding artistic conventions, implausible, exotic and supernatural elements.

Realism has been prevalent in the arts at many periods, and is in large part a matter of technique and training, and the avoidance of stylization. In the visual arts, illusionistic realism is the accurate depiction of lifeforms, perspective, and the details of light and colour. Realist works of art may emphasize the ugly or sordid, such as works of social realism, regionalism, or Kitchen sink realism.
There have been various realism movements in the arts, such as the opera style of verismo, literary realism, theatrical realism and Italian neorealist cinema. The realism art movement in painting began in France in the 1850s, after the 1848 Revolution.[1] The realist painters rejected Romanticism, which had come to dominate French literature and art, with roots in the late 18th century.

1. An abstract or general idea or term.
2. The act of considering something as a general quality or characteristic, apart from concrete realities, specific objects, or actual instances.
3. An impractical idea; something visionary and unrealistic.
4. The act of taking away or separating; withdrawal:
The sensation of cold is due to the abstraction of heat from our bodies.

For sake of discussion we could simplify abstract as a term to mean sort-of ‘artistically changed’. This spectrum of art can be anywhere from slightly abstracted all the way to unrecognizable subjects (not literally depicting something).

The often misunderstood type of art known as abstraction aims to take subjects from reality but present them in way that is different from the way they are viewed in our reality. This may take the form of emphasizing lines, shapes, or colors that transform the subject.
Magritte painting entitled, "The Treachery of Images", 1928-1929.  Written in French under a representational painting of a pipe, is the phrase, "This is not a pipe."  The point is that the painting is indeed not a pipe, but rather a painting of a pipe.  Artists of this time where now approaching paintings as paintings, allowing for a new form of intellectual expression.  Many people have difficultly in understanding the differences between abstract art and non-objective art.  The clear difference lies in the subject matter chosen. If the artist begins with a subject from reality, the artwork is considered to be abstract.  If the artist is creating with no reference to reality, then the work is considered to be non-objective.

Non-Objective art takes nothing from reality. It is created purely for aesthetic reasons. The intent of Non-objective art is to use the elements and principles of art in a way that results in a visually stimulating work.

Non-Representational
This, as the name suggests, is art that does not depict a discernable subject. No representation has been made. In definition, it can be somewhat interchangeable with Non-Objective.

The best way to learn about kinds of art is from history. The internet is an amazing place for this.
Here's an example of a rather comprehensive time line, from cave art to the 19th century (although a bit of a Eurocentric one):
Early Art History
I also like learning about modern art, street art and going to galleries.

Knowing What Type of Art to Use / Communicating

Some decisions will be intuitive while others may require further consideration. Either way, how and what your trying to communicate go closely together.

In 2007/08 I lived in South Korea. I didn’t speak the language and many ‘even-basic things’ were difficult to do.

One day I went to a large department store looking to find a bike lock. All the signage and service staff used a language I know nothing of. That day I happened to have a small sketchbook in my possession. I drew a simple picture of a bike lock, and showed one of the people working in the store. They immediately knew what I wanted and led me straight there. It was the first time I can remember using art to communicate in such a way, and I started bringing my sketchbook everywhere.

The kind of drawing I do to ask for a bike lock, and the kind I do to hang on the wall are usually quite different. In the case of getting an idea across, a fast simple line drawing is usually the best answer.

When drawing fast, start with the basic shapes and structure. Omit details. Fast drawing is also a good way to get gesture, movement or record something that will soon be gone or change.

As an exploration of drawing it's good to be "to the point" sometimes. Inversely so, there is value in learning to make a picture purely from your mind. It can help you shake off 'writer's block' and make divergent-thinking kind of discoveries. Instead of imagery, think of rhythm or pattern.

Here's a link to an interesting example:
Abstract Drawing